Essay Sample on the Power of Caricature in France 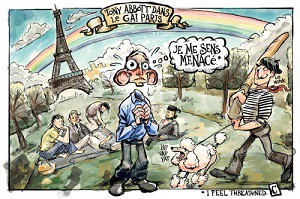 When starting a conversation about the role that caricature plays in France, everyone recalls the recent murderous attack on the journalists of the satirical magazine ‘Charlie Hebdo’.  Horrific as it is, the tragedy with French caricaturists serves now as a reminder of how dangerous playing with fire may be and how powerful the images may appear. In book called ‘The Art of Controversy’ written by Victor Navasky, the author explains that images based on politics can both – inspire and offend. Moreover, the publisher of ‘The Nation’ states that there’s no other more powerful communication tool to jolt the mind of an individual than images. Let’s take a quick look at how deep-rooted the caricature is in French society.

In the country of haute couture, the art of caricature popped up in XVIII century. When the Revolution of 1789 began, all caricatures and books that included illustrations greatly highly multiplied. The number one target of caricaturists was the king of France. Moreover, even the murder of Louis XVI was preceded by a bunch of illustrations that demonstrated this symbolic death.

But long before the Revolution, underground comic strips were shared out showing nobility in the most humiliating situations. Just recall old good Marie Antoinette and her pornographic images which were especially popular among mere mortals. Even long after the execution of Marie Antoinette the impact of caricatures became a sensitive matter for the local authorities. Back to the days of François-Régis de la Bourdonnaye, the interior minister of France who was particularly worried about the impact of ‘lithographs’. According to the words of Comte de la Bretèche, all caricatures ‘have an immediate impact on the individuals’ imagination, just like instantly reading a text; in case it damages the decency of the society, the consequences will ensue in a flash and will most likely be beyond any repair.’

Nowadays the fate of caricature (especially related to politics) is tightly linked to the one of the press. What’s more, it seems like the modern cartoonists have some kind of voodoo abilities to turn the human beings into the pincushion dolls, in order to be able to hurt people, while knowing they can’t fight back. But truth is, apart from the enormous power of caricature in France, there is also a particular tradition of pretty shocking and scandalous visual mockery.

In 1831, the greatest cartoonist of France Honoré Daumier portrayed the King in a form Rabelaisian giant, who was sitting peacefully on the toilet and grabbing the food off his hunched people. Honoré Daumier was taken to prison for his ‘masterpiece’ and in several years a specific law targeting the caricature authors was promulgated. Up to 15 prosecutions were initiated due to the ban of authorities. The law wasn’t taken down for some decades.

Back in the XVIII century, the royal family of Versailles became the target of cartoonists. Nowadays there are new targets to point at: the police, politicians and religious preachers. But the spirit of satire and disrespect that once shook the ancient times maintains the balance even in present days.