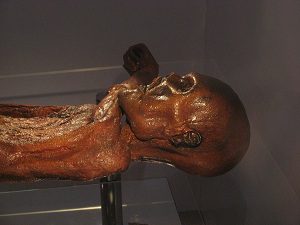 The natural mummy that was found in the ice in 1991 and called Otzi has uncovered a few peculiar facts about life all over the European continent dating around 5 300 years ago. The weight of the mummy found in the ice of the Otztal Alps was more than 100 lbs., while his height was over 5 ft. According to the latest researches, he had died at the age of 45. The most impressive fact about his death was that the mummification process was not man-triggered (like the one ancient Egyptians used to do), but completely natural.

The mummy was found in the area of Otztal Alps by two hikers. On a sunny day Helmut and Erika Simon, from Nuremberg, were having a promenade in the Alps. The couple was simply walking past a rocky gully and noticed something that was of a brown color. They considered it some kind of rubbish, but when they took a closer look at it, they were terrified to find a real human corpse. END_OF_DOCUMENT_TOKEN_TO_BE_REPLACED