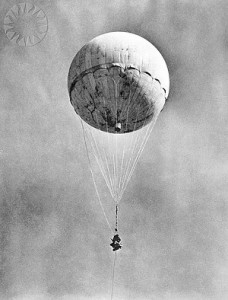 Japanese launched a project on sending self-portable balloon bombs. The first weapon to strike between continents. Explosives were traveling from Japan to the US in jet streams, fitted with altitude meters through the course of development. The air flow cooled down the balloon and it descended into waters failing to reach destination. Later they were fitted with sandbags for weighs, released when the altimeter readings dropped, to get back into the air current. Providence of sand was the main clue about the source of attacks. This is how the search was geographically narrowed down to Japan as we know by now. END_OF_DOCUMENT_TOKEN_TO_BE_REPLACED