6 Grammar Myths That Do Not Need to Exist 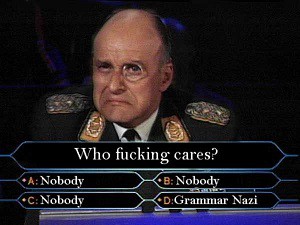 When the conversation flips to the English language, grammar is what usually causes a severe headache among students, especially the ones, who aren’t native speakers. They suffer badly to make their language next to perfect and greedily learn all possible grammar rules. If you’re one of them, there is some good news for you. Some of so-called errors can be skipped since they do not actually exist! That’s right. Let’s take a closer look at the typical grammar ‘unicorns.’

Nouns Modifiers Do Not Exist

Rug is a noun, while the word household is also a noun. A household rug is a rug that is used in the household. In this case, a noun modifier that is used to specify that one noun becomes a part of something else. In other words, the small rug mentioned above is the part of the household.

Starting the Sentence with a Conjunction Is a Sin

Here it is. There is nothing wrong in starting your sentence with the conjunctions but and and. The point is that there is no book or manual that actually forbids doing so. Well, except for a single text written by Dennis Baron that dates back 1868, but that’s nothing. A lot of people just feel that doing so is grammatically unacceptable, while they cannot explain WHY.

The Rules about Using As and Like Are Inflexible

Ending Sentences with Prepositions Is Wrong

For grammar’s sake, why? The pointless rule that limits closing the sentences using prepositions seems to come directly from the 18th century, when strict Latin language did not allow splitting infinitives. But we’re living here and now, speaking the language that is distantly related to Latin and has its own rules and customs.

Data Must Be Used Only in the Plural Form

Where have you found this data? Of course, one may say datum as the singular form, which makes you sound like you’re dull. People, who prefer saying datum, always receive data but NOT dates!

While thinking about unicorns and sandmen brings nothing wrong into your life, it’s better to forget about those bogus grammar rules for good.